The project is unique because of the range of groups in close proximity, all focusing on slalom, in a weather-controlled environment, and each having the opportunity for massive training volume each day: two sessions, 20 runs per session, 800 turns per day, quick turn-around.

It’s not often that young ski racers at the regional and club level get to train next to or with Land Rover U.S. Alpine Ski Team athletes. It’s even less common for these athletes to cross over while skiing at an indoor training venue. Enter: Snow Valley Indoor Ski Center, in Belgium.

Three projects wrapped this past week at the indoor venue, including a tri-regional project co-led by the dynamic duo of Rocky/Central Region coach Kristina “Rev” Revello and Eastern Region coach Nate Bryant. The project included 15 athletes across the nation, ranging from first-year FIS and national development group athletes to collegiate athletes like Dartmouth’s Kalle Wagner and Nick Krause, and aspiring World Cup athlete Storm Klomhaus. There was great leadership from the older athletes, and growth opportunities for all involved.

“The athletes and staff worked very hard to make gains, both on and off the hill,” Kristina said. “It was really exciting to ski inside and not have weather affect our training; the surface was generally consistent and provided a positive environment for learning. We were able to have our own dedicated space on the venue to set up appropriate courses and allowed space for better focus by limiting outside distractions.” What’s the value of limiting distractions? It meant the athletes were able to really hone in on what coaches were asking of them. “At this time in the season,” Kristina continued, “it’s important to continue working on building a well-balanced platform while pushing speed and agility, every athlete was faster and times were closer together as we moved through the week.”

Steamboat Springs Winter Sports Club FIS coaches Robert Baker and Sara Radamus were there to support the project, with Sara specifically supporting Storm - who will now make her way to Sölden, Austria for additional training. Kristina noted that the staff worked very well together, and the level of experience made it easy to elevate their level of professionalism.

“Additionally, everyone had a voice and gave input as to what we did well each day and what we can do better the next,” Kristina added. “I went in with a plan and an end-game, and each day we assessed our progress and made adjustments as needed. It’s good to have an outline with an end goal in mind, but to remain flexible and open to changing the plan. This is a point that means a lot to me as coach - creating a space where we can share in order to improve and make changes if needed. The athletes see this example and follow by voicing their own thoughts. It’s win-win for all of us!”

With Sara’s dedication and support, Storm was able to train with the Europa Cup/World Cup tech women during their last two days. Kristina noted that Storm made tremendous improvements, while collegiate athletes Nick and Kalle each stepped up and were great examples of leaders to the younger athletes in the group. “Having college level athletes attend our camps is crucial for them, as well as being able to give back to the larger community,” Kristina said. “Many of the (younger) athletes would like to ski in college so it was good for them to have that interaction. Our younger invitee athletes were able to make strides and showed they belong with this national development group. Hopefully everyone will get a solid block in the gym and will come to Colorado with newfound motivation to go even faster.”

Along with the tri-regional project, the women’s development team project, led by head women’s development coach Marjan Cernigoj, was training alongside the women’s Europa Cup/World Cup tech team at Snow Valley. The development group included C Team athlete Galena Wardle - who is still doing her return to snow progression after sitting the 2019 season out with an injury - as well as D Team athletes Lauren Macuga, Ainsley Proffit, Emma Resnick and Zoe Zimmermann. This camp focused on additional high-level  pace in preparation for NorAm and World Juniors.

“Each group has separate training environments, but there were crossover opportunities for the best athletes in the younger groups to ski-up with the faster/older athletes,” Alpine Development Director Chip Knight said. “They are training very similar, even parallel courses so the opportunity for direct comparison and analysis is readily available.”

Chip added that “the project is unique because of the range of groups in close proximity, all focusing on slalom, in a weather-controlled environment, and each having the opportunity for massive training volume each day: two sessions, 20 runs per session, 800 turns per day, quick turn-around. The coaches all report impressive gains from the athletes in a very short period of time. The focus is slalom repetition, especially on timing of pressure, movement, and pace.”

Up next for the women’s Europa Cup and World Cup group will be a camp in Sölden, Austria on the Rettenbach Glacier in advance of the FIS Ski World Cup opener on October 26-27. 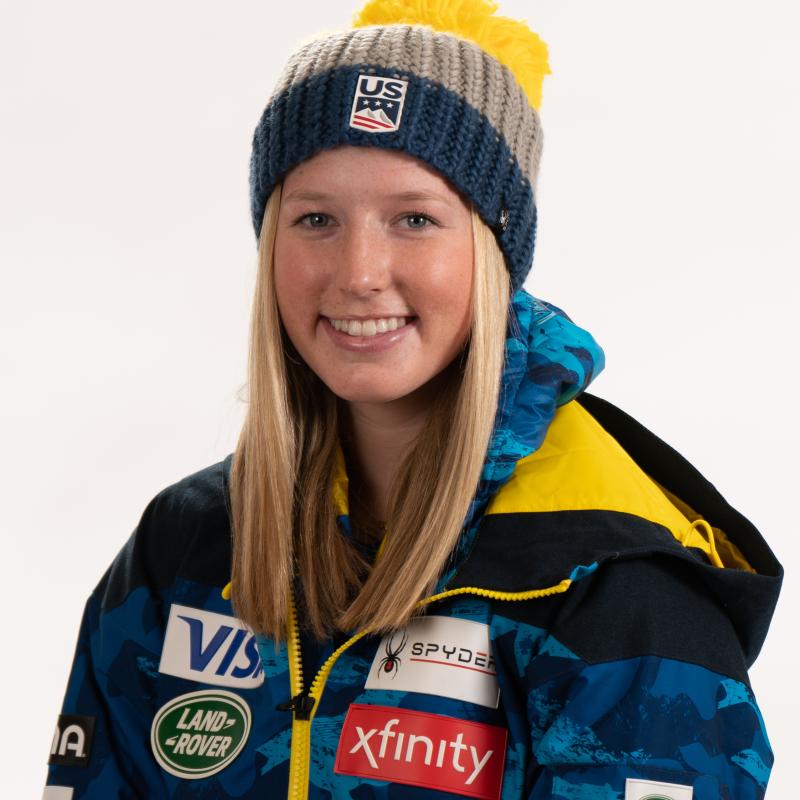 Emma Resnick
Emma won the super-G and slalom events at U16 nationals, and took the overall U16 national title. Emma is a standout student athlete. She won the student-athlete of the year in 2018, MVP in volleyball 2017, and the Les Streeter Cup award SSSCV in 2019. 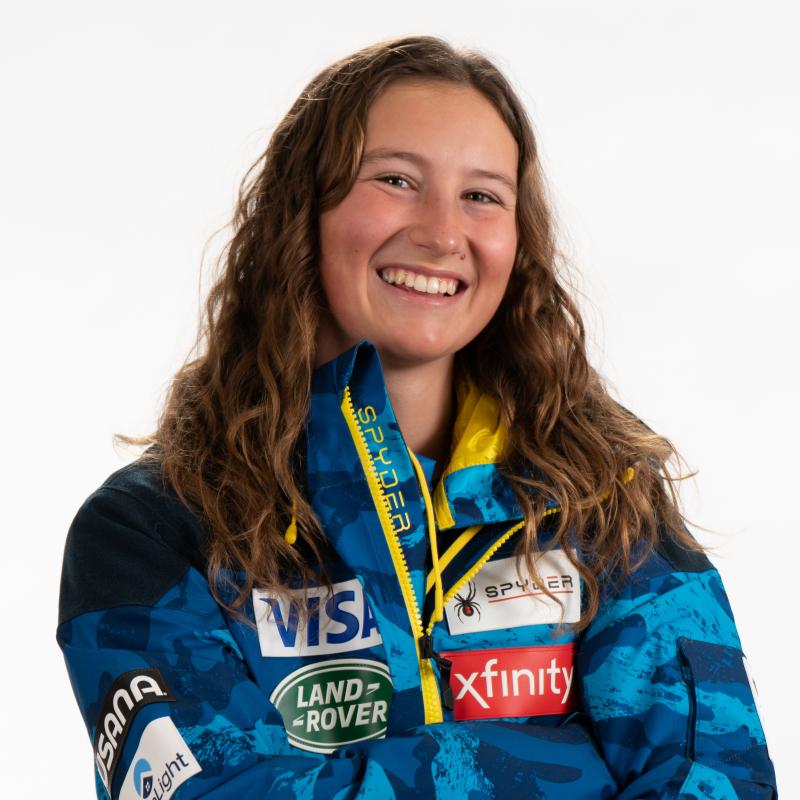 Lauren Macuga
Lauren already has an impressive career: she got second in super-G at Junior Nationals and tenth in downhill at a NorAm race in Sugarloaf, Maine in 2019. When she isn't skiing on the mountain, she likes to waterski.

Zoe Zimmermann
Zoe Zimmermann began skiing at age two at Gunstock Mountain in her home town of Gilford, N.H. Dressed in a pink one-piece suit and under three feet tall, she would turn heads as she barreled straight down the mountain with her father close by yelling at her to “look ahead”! 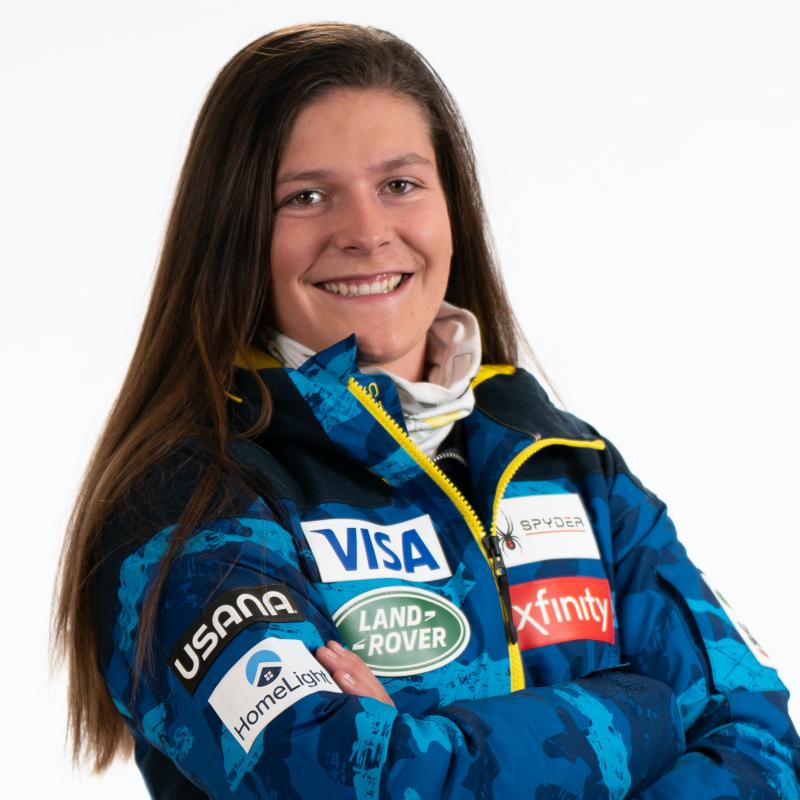