“That was the most fun race I’ve ever done!” exclaimed Hannah Halvorsen, who teamed up with Julia Kern (USA II) to finish eighth. “I crashed in both the semi and final, which I felt bad about, but I definitely came away with an awesome experience. My teammate Julia skied amazing and our skis were super fast.”

There were numerous crashes and collisions throughout to race, especially during the exchanges on the fast, narrow Robotron Ski Arena course along the banks of the Elbe River. After winning their semifinal race, Jessie and Sophie came into the finals as one of the favorites, along with Switzerland I and Russia I. But in the finals, the exchanges - where one teammate tags off by touching any part of their teammate's body all the while in a full sprint, proved to be the deciding factor of the race.

Heading into the last two exchanges, Russia I and Switzerland I had a clear advantage over Slovenia, Czech Republic I, and USA I (Jessie and Sophie). Down the stretch, Switzerland I out-sprinted Russia I to take the victory, with Slovenia I finishing third. Sophie sprinted past Tereza Beranova of Czech Republic I to finish fourth.

“We fought hard out there, and I  so proud of all our teams for giving it our best effort,” Jessie said. “Personally I struggled a bit with positioning on such a short and tactical loop, but I was proud of how I held my own in city sprinting on a course that challenged me in different ways. I thought we had great skis and it’s nice to feel that we’re working our way into better and better racing form.”

In the men’s race, Kevin Bolger and Simi Hamilton (USA I) represented the U.S. in the finals. On the opening lap, Kevin was third into the first exchange, however, Simi snapped a pole, so Kevin handed him one, but the ensuing chaos dropped Simi to the back of the 10-team field. As one of the best athletes in the race though, Simi turned on the power and moved back into the pack as Russia, France, and Italy kept the pace in check.

Down the stretch, Russia I took the narrow victory over France I, with Italy I in third. USA I (Simi and Kevin) finished ninth.

Most importantly, the Davis U.S. Cross Country Team walks away from Period 1 with a number of athletes posting World Cup best results, including:

Up next, the team will enjoy a bit of Holiday downtime while preparing for World Cup Period 2, which kicks off with the FIS Tour de Ski in Val Müstair, Switzerland with a freestyle sprint on January 1. 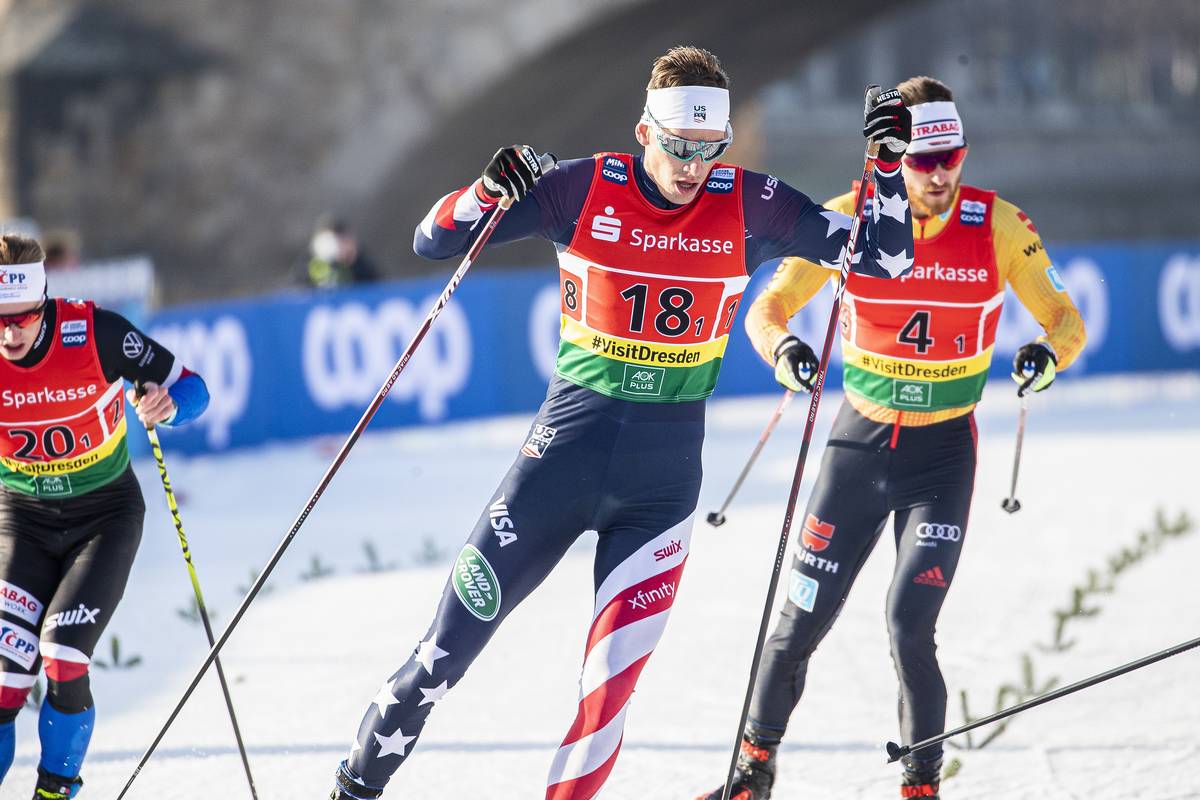 Simi Hamilton is right in the middle of the exchange chaos during the men's team sprint finals. (Modica/NordicFocus) Hannah Halvorsen picked up her first career World Cup points in Saturday's individual sprint and then added more points teaming up with Julie Kern to finish eighth in the team sprint Sunday. (Modica/NordicFocus)