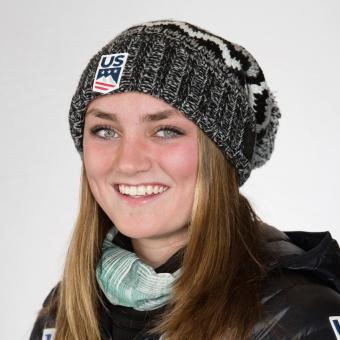 Zoe Zimmermann began skiing at age two, at Gunstock Mountain in her hometown of Gilford, New Hampshire.  Dressed in a pink one-piece suit and under three feet tall, she would turn heads as she barreled straight down the mountain in her snowplow with her father close by yelling at her to “LOOK AHEAD!!" Zimmermann comes from skiing heritage; her grandfather, Egon Zimmermann was on the Austrian Ski Team in the late 1950’s and competed in the 1960 Olympics in Squaw Valley, while her grandmother, Penny Pitou, was on the U.S. Ski Team during the same time, and won two silver medals at Squaw Valley.

She raced for the Gunstock Ski Club from five to nine-years-old, before moving on to Waterville Valley Academy and the WVBBTS Ski Club as a first-year U12. It was there that she began to show her promise as a top-tier ski racer, winning many Eastern Region races.  She just loved to ski, especially with her friends, often calling her dad on a beautiful weekday morning of training to say, “DAD! What can be better than this?!”. Zimmermann showed her creative side as well, acting in plays at her local theatre and making up “ski” songs and dances with her friends that they would perform up at the start of the races.

Zimmermann is currently a junior at Burke Mountain Academy in Vermont. She has continued to flourish as a ski racer, student, and good friend to all her Burkie buddies.  In her freshman year, she injured her MCL and was off snow for four weeks, missing an important NPS series. Although disappointed, she never complained, instead putting her energy into rehab and getting stronger in the gym. Her comeback that spring was impressive, qualifying to compete at Topolino, taking first place for her age group at the U16 National Championships at Sugarloaf, ME, and qualifying for the Whistler Cup (where she won the first run of the slalom and took seventh in the super-G). During the 2017-18 season, Zimmermann competed at the Seven Nations Cup event held in Malbun, Lichtenstein, grabbing 4th place in slalom. She finished off a great season winning the overall U16 National Championship at Mission Ridge, WA with a first place in slalom, second in super-G, and third in giant slalom, solidifying her spot on the Development Team for the upcoming season.

Off the snow, you'll find Zimmermann mountain biking on the Kingdom trails in East Burke, Vermont, working out with her long-time trainer in New Hampshire, and just hangin’ with her friends. She recently got her driver’s license, so be forewarned if you are driving around New Hampshire! Oh, and she loves to shop for clothes and shoes.