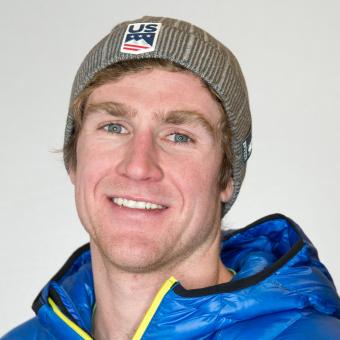 Another member of the famous Skiing Cochrans, Ryan Cochran-Siegle's mother is 1972 Olympic slalom gold medalist Barbara Ann Cochran, which also means he's cousins with a handful of other former U.S. Ski Teamers including Jimmy Cochran. But this Junior World Champion didn't make the Team by family attrition; he did it by fast skiing at every level. Good news: his elevator is just getting off the ground floor.

After winning gold in both downhill and combined at the 2012 Jr. Worlds, Cochran-Siegle's stock was rising as fast as he was skiing. The trend rolled right into the 2013 then BAM, he blew his ACL and MCL while racing the downhill portion of the super combined at the World Championships. Back on the horse in 2014, RCS picked up where he left off to win the NorAm overall title, finish second in downhill and third in both super G and giant slalom. Cochran-Siegle elected to take the 2015 season off to focus on rehabbing a Lateral Meniscus and Osteochondral allograft transplant, but worked hard in a return-to-snow program with teammates Tommy Biesemeyer (Keene, NY), Resi Stiegler (Jackson, WY) and Erik Arvidsson (Woodside, CA) under coach Bernd Brunner to come back in the 2016 season.

In 2016, Cochran-Siegle made his World Cup giant slalom debut and four races later, scored his first giant slalom points with a 30th place at Kranjska Gora, Slovenia. To finish the season, Cochran-Siegle grabbed three top five finishes at the U.S. Alpine Championships in Sun Valley, ID with a fourth place in the alpine combined and two second place finishes in super G and giant slalom. Big things to come from this guy in the coming years!

FIRST TRACKS
With skiing in the family bloodline, it's pretty safe to say Cochran-Siegle got his start at the family ski area in Richmond, VT. But, like any active kid, he was into all sorts of sports including soccer and baseball before he centered on skiing following high school graduation. His mom taught him how to ski at Cochran’s Ski Area in Richmond, VT around the age of 2, and he hasn't looked back since. A solid 2010 season boosted him to the U.S. Development Team and he made good on the experience with a jump to the B Team the following winter.

OFF THE SNOW
Cochran-Siegle, his cousins (Jimmy Cochran, Robby Kelley, Tim Kelley, Jessica Kelley and Roger Brown) and other members of the Cochran clan spend a lot of time at the family ski area. But things just got a little sweeter with the grand opening of their sugar shack, where they have begun to make Cochran's Slopeside Syrup. Not only does the syrup business keep him busy when he’s home, it also helps pay the ski racing bills. Ryan refers to himself as a "professional maple syrup chugger", but he only endorses 100% pure Organic Vermont Slopeside Syrup. Order yours at www.slopesidesyrup.com.

During the summer months, he lives with cousin Jess Kelley and her husband Adam Cole, and focuses a lot of his time on conditioning for the race season and enjoys playing basketball and mountain biking. What's more, Cochran-Siegle is also whip-smart, and currently participating in the 3-2 Engineering program at Westminster College, where he's working on completing a dual degree in Physics and Mechanical Engineering.