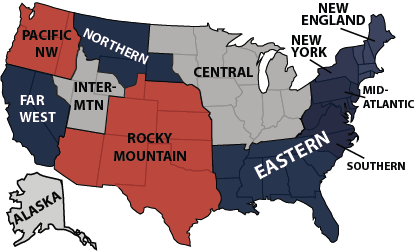 The Alyeska Ski Club, at Alyeska Resort, offers the only masters training and racing program in Alaska. The program is open to all skiers 18 years and older and have at least beginner/intermediate skiing skills. Members in this program range from Masters National Champions to first time racers. Most sanctioned masters races are held in conjunction with junior events at Alyeska Resort. Out-of-division racers with appropriate Alpine Masters membership are always welcome to enter.

In the Central Division, Midwest Masters represents U.S. Ski & Snowboard as the only Masters alpine club and hosts all Masters alpine racing in the Midwest. The Central Division consists of Minnesota, Wisconsin, Michigan, North Dakota, South Dakota, Iowa, Illinois, Indiana, Ohio and Missouri. We are an open, volunteer, not-for-profit organization and welcome all who wish to participate. Events are hosted at a variety of ski areas throughout the Midwest. Racers range in age from 18 to over 80 years old. Races follow U.S. Ski & Snowboard rules, with some adjustments per Midwest Masters. Based upon the race, competitors compete based on age class and/or ability class. This allows racers to compete directly with those in their age group as well as those at their ability level.

The Eastern Division is governed by the Eastern Masters Committee and is divided into four masters series: New England, New York, Mid-Atlantic and Southern.

New England Masters Skiing, Inc. is a nonprofit corporation, which administers the Sise Cup Series. This series offers a season-long schedule of races comprised of slalom, giant slalom and super G with all courses conforming to U.S. Ski & Snowboard specifications. Award parties follow each race, where prizes are given to the top finishers in each age group. Season-long standings are kept, and awards presented at the final awards banquet. The series includes a broad spectrum of ability levels, with an emphasis on fun for all.

The New York series offers an incredible value for its participants. In addition to having access to some of the best race hills and race crews in the Upstate New York, we also continue to have a two race format that allows for four race runs per day. Even with four race runs, there is still ample time for free skiing and après race activities. Most race fees include lift ticket, adult beverages, and après ski food in addition to the race.

The schedule includes SL, GS and SG and is subject to change as the season progresses.

Come on out and join us for a great year of New York State Masters Ski Racing. See you on the slopes.

Mid-Atlantic Masters Skiing, Inc., is a nonprofit corporation that administers the Foy Cup Series. This series offers a season-long schedule of races and awards to the overall and class winners for men and women, juniors, and teams. Mid-Atlantic Masters’ roots originated from the ASRA ski race organization, which was formed by John (A.J.) Foy in 1980. We encourage family participation and provide seasonal awards the categories of Ironman, Family, Team, Seasonal Age Class, and the Foy Cup overall champion. Above all, our primary goal is to have fun and enjoy challenging ski racing at the same time.

Open to U.S. Ski & Snowboard members who hold a valid masters membership. Masters racing provides the next step up for NASTAR racers and recreational racers who would like to be in a higher level of ski racing. Masters from other regions who hold valid masters membership are welcome to participate in any SARA races. The races are held in Virginia, West Virginia and North Carolina. Far West Masters Ski Racing events are open to competitors 18 and older. The race schedule includes high quality competitions held throughout the Sierras from the beginning of December through April. New racers and masters from other divisions are welcome! Be sure to check farwestmasters.org for detailed information and updates throughout the season.

We welcome racers of all levels. From beginners with a passion to learn, Nastar racers, former college racers, ex-Olympians to anyone else who loves to improve their racing and enjoy the social life with other adult racers who have a passion for ski racing. With an age range of 18 to over 90 years old, racers compete in age brackets of five-year increments. The fastest 10 men are pulled from their age classes and put in a Super Seed, allowing the elite to compete with each other while creating more opportunity for age class racers to medal as well.

Intermountain Masters hosts races at ski areas in Utah, Idaho, Wyoming and jointly in Montana with Northern Division Masters. Average race days consist of 2 runs with first run in the morning and second run in the early afternoon. The idea is to combine ski racing with plenty of time for free skiing at numerous world class resorts, social events and to allow plenty of travel time. Each race day ends with an awards party and the opportunity to socialize on and off the slopes. PNSA hosts races from December through April in Oregon, Washington and Idaho. Points are awarded by finish position in each age category and season champions are crowned at the PNSA season finals. Double PNSA World Cup points will be awarded at Finals! Leader bibs (for PNSA season pts holders) will be awarded to the top male and female points holders to be raced in the next season.

We welcome all levels of skiers, from skiers looking to challenge themselves on a longer course than NASTAR or City League, a returning junior racer who misses the sport, a racer parent who wants to experience racing for themselves, or the most avid ski racer who attends every event they can. Our goal is to have fun, ski with and meet new friends, fine tune our skiing skills and support Masters and Junior racing. We encourage racers to bring a friend to a race and spread the word about Masters Racing!

The Rocky Mountain Masters Ski Series is a nonprofit volunteer organization. Our members cover a wide range of ages and abilities. We compete in all four alpine ski-racing disciplines, DH, SG, GS, and SL. We offer a long race season with more speed events than any other division. After race parties feature food, drinks, prizes, awards, and FUN!